In Advertiser-Agency Relationships knowing there is an issue is one thing.

Doing something about it is another.

When it comes to Advertiser-Agency Relationships, Michael Farmer & Brian Jacobs have eloquently covered the systemic, historical factors that have contributed to the current situation. The articles by Michael When Best Practices are Worst Practices and ANA and 4A’s Duke It Out…. and Brian Agency Reboot are here.

Notably, history has taught something else that people find hard to learn. The Montagues & Capulets in Shakespeare’s Romeo & Juliet are no different to today’s real world ANA & 4A’s. No good comes from simply blaming the other party, or as Shakespeare put it “A Plague on Both Your Houses”*. Thus, if what you wish to achieve involves another party, then the best chance of a healthy future comes from stopping the mud-slinging. Start talking to, not ‘at’, each other.

A recent Aprais article accompanied its “Why Ogilvy was right….” Cannes Lions presentation. Its title was It Takes Two to Tango. Importantly, it was backed by vast amounts of data (over 16,000 Client-Agency Relationships evaluated). The data showed with a 99.99% statistical confidence that BOTH parties have a role to play in making the relationship work. For the first time, there was empirical proof of Ogilvy’s powerful insight “Clients get the advertising they deserve”. Moreover, when both parties are at the top of their game the benefits can be as much as +37% better creative output and +21% better media planning. Compellingly, it was also shown that through a systematic, constructive dialogue and feedback process genuine, long-term improvement can be achieved. 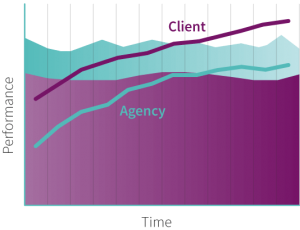 Surely that is enough incentive to ‘lay down the weapons’, start talking and working together? So @ANAmarketers, @4As, now’s the time to lead by example and show Advertisers and Agencies that ‘Two Can Tango’.

We only use cookies to give you the best browsing experience. Find out more

We use cookies to ensure that we give you the best experience on our website. If you continue to use this site we will assume that you are happy with it.Ok